Christ Jesus…, being in very nature God, did not consider equality with God something to be used to his own advantage; rather, he made himself nothing.
Philippians 2:5-7

The Almighty Came in Weakness

Devotion based on Philippians 2:5-7

Jesus was there at Creation. He was the powerful Word by which heaven and earth and everything in them was made. By his power, the world keeps spinning; plants keep growing; we keep breathing.

During his life on earth, people saw hints of his power. He walked on water and turned water into wine. He rescued the hurting and the hungry. He drove out demons and brought the dead back to life. But those were the exceptions rather than the rule.

Mostly, Jesus looked rather…well…normal. Jesus came into the world as a weak and vulnerable infant. He who fills heaven and earth was contained in the womb of a woman. He who is everywhere at the same time had to walk to get from point A to point B. He who invented energy got tired, thirsty, and hungry.

Jesus never stopped being God. He was still the almighty Creator, even when he became one of the created. He still had all power, all wisdom, and deserved all glory. But he chose not to fully use or display his power. He chose to set aside some of his knowledge. “He made himself nothing.” Literally, he emptied himself. He became one with us, not only in our humanity but also in our weakness.

He did it for you. He saw how weak even the strongest among us can be in the face of temptation. He saw how powerless we were to get into heaven on our own. And he chose to do something about it. The Almighty came in weakness to save the weak.

Prayer:
Loving Savior, you came in weakness to rescue me, a weak sinner. Praise and thanks! Amen. 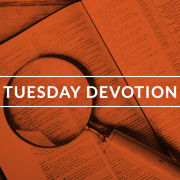